A New Electorate for a New California

A lot has changed in California since 1978 when Proposition 13 was passed by voters – including the electorate. Today’s electorate is increasingly more reflective of the population of our state, and the policies these new voters support are much more reflective of the true needs of Californians. Seventy percent of Californians who voted in the 1978 election when Prop 13 passed were white – Latinos made up just 2% of the electorate and Asian voters represented less than 1% of voters. By 2012, Latinos and Asians made up 22% and 11% of the electorate respectively.  This change in the electorate has been a huge factor in ushering in recent policy victories like Prop 30 in 2012 and Prop 47 in 2014. 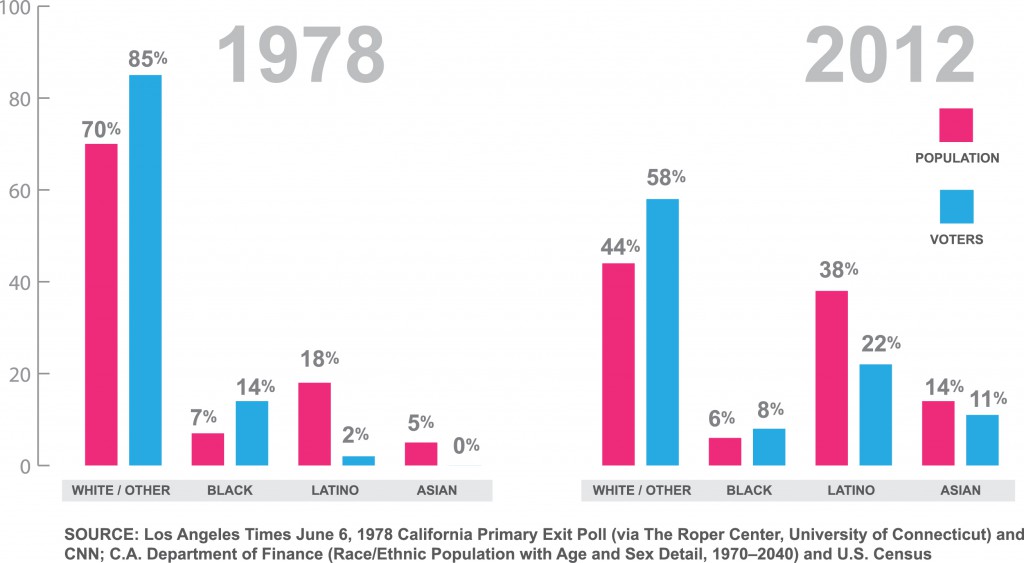 For nearly forty years, Prop 13 has prevented full funding for California’s schools and neighborhood services. Loopholes in the law have allowed big corporations and wealthy property owners to avoid paying taxes based on the true value of their property. This has meant the rest of us have watched the steady decline in education and services our communities need.  Yet despite the impact of Prop 13 on California, many point to overwhelming voter support in 1978 and recent polling of “likely voters” as a sign that voters won’t approve reforms to our broken property tax system.

Now, the New California Electorate is beginning to speak out about Prop 13. 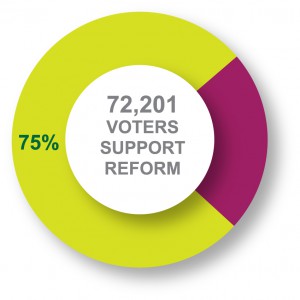 From May 18 to June 15, nearly 650 grassroots leaders and volunteers from California Calls contacted 96,733 voters across the state using a high-capacity predictive dialing system and traditional door-to-door organizing in English, Spanish and Chinese. Seventy five percent (72,201) of voters expressed support for closing loopholes created by Prop 13 that allow some corporations and wealthy landowners to avoid paying their fair share in commercial property taxes. 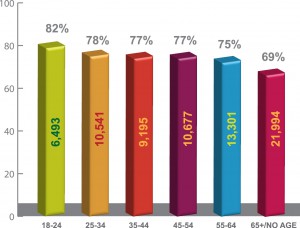 Grassroots leaders found the highest levels of support among voters who didn’t even know about Prop 13. 82% of voters between 18 and 24, all born over a decade after Prop 13 was passed and most with little to no knowledge of the law, said that they thought it was time to close loopholes. Young voters, along with the 68% of voters of color and 79% of immigrants who also believe it is time to reform Prop 13, are among those most impacted by the law’s unintended consequences – budget cuts to education, services and infrastructure. 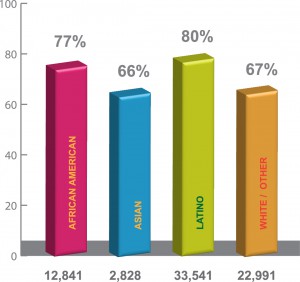 Many opponents of Prop 13 commercial property tax reform use fear to convince homeowners and seniors that making any changes to the law will impact their own property taxes. But, when grassroots leaders spoke with these voters about how corporations and wealthy landowners are benefiting from loopholes that have left their communities without the funding they need, 71% of homeowners and 69% of voters 65 years old and older support closing the loopholes. 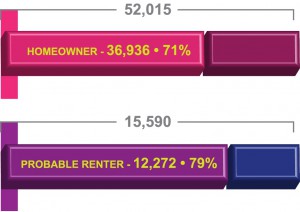 According to California Calls’ voter feedback, the New California electorate believes the role of government is to help Californians, not to provide disproportionate benefits to corporations. They believe that funding education and services in communities that need them the most should be a priority . They believe that all Californians deserve access to quality, affordable health care.  And they believe that the wealthy should pay their fair share, as demonstrated by the overwhelming voter support for Prop 30.

The new electorate has the power to make the unthinkable, possible.  They have the power to create margins of victory where many predict defeat.  It is clear from the conversations with California Calls’ grassroots leaders that these voters are ready to see meaningful reform to Prop 13. California Calls’ leaders will continue to have conversations with voters about the importance of closing loopholes and voting in every election throughout the year.

Through our consistent, ongoing organizing and outreach, by 2016, California Calls and our allies will engage 1 million infrequent voters, creating an expanded electorate more representative of California’s population and more supportive of bold reforms that advance social equity and fairness.