The strategy and model of California Calls was based on more than 20 years of local experimentation in Los Angeles through Action for Grassroots Empowerment and Neighborhood Development Alternatives (AGENDA) and Strategic Concepts for Organizing and Policy Education (SCOPE).

2003 A small group of social justice organizations from Los Angeles, the Bay Area, San Jose and San Diego begin a series of meetings to discuss their common goals and the need for a statewide network of locally-based organizations that could jointly educate, organize and mobilize low-income residents on statewide issues. The group bands together as the “California Alliance” and begins to use new technology to increase the effectiveness of its one-to-one grassroots organizing and voter outreach.

2006 The California Alliance (as California Calls was then known) begins a training program to build the civic engagement capacity of member organizations. This included training on the basics of running a voter outreach program, strategic analysis and planning to ensure that this work re-shapes the political landscape over time. In 2006, the California Alliance released the “History of Tax and Fiscal Policy” report which chronicles the history of statewide tax battles since Prop 13’s passage in 1978. The report asserted the need to develop policies to create systemic change and laid out what it would take to win them. The Alliance also began several years of research and experimentation on social values analysis and organizing. This work led to two publications: “Social Values Organizing Manual” (2008) and “California Roadmap for a Tax and Fiscal Majority: A Values-based Approach” (2010). These reports form the basis for the strategy that became California Calls, which guides the work to this day.

2009 The California Alliance steps up its ambitious goals, this time with a core focus on systemic tax and fiscal reform and a long-term strategy to win these changes. The renewed momentum is to build a statewide supportive base of 500,000 new and infrequent voters who believe in the need for tax and fiscal policy reforms. The Alliance formally launches this new strategy with eight groups in four counties (Alameda, Los Angeles, San Diego, Santa Clara). Early experimentation with using predictive dialer telephone outreach begins, enabling volunteers and organizing staff to reach thousands of voters over the course of a few weeks.

2010 California Alliance expands its civic engagement work to include Ventura County, the Inland Valley (Riverside and San Bernardino Counties) and three counties in the Central Valley (Fresno, Tulare, and Kern). California Calls Action Fund, the 501c4 sister organization to California Calls did extensive voter education on Prop 25 , a measure to enable the Legislature to adopt a budget by a simple majority (rather than 2/3) vote, contributing to its successful passage during the November 2010 election. Voters engaged by California Calls Action Fund turned out at a rate 4% higher than the statewide average. At this point, a growing number of voters supportive of California Calls’ long-term agenda for progressive tax and fiscal reform had been identified through four civic engagement programs since 2009.

2011 California Alliance rebrands itself as California Calls, reflecting that a better California is “calling” us all. California Calls local anchor groups continue to wage collective, statewide civic engagement programs to educate and motivate new and infrequent voters. California Calls holds a series of statewide meetings involving over 50 labor, faith-based, civil rights, environmental, health, education and social service organizations to study different options for reforming California’s tax and fiscal policies. Led by a committee of academic scholars and tax policy experts, the statewide convenings select a list of one dozen short, medium, and long term policies that could generate billions of dollars in state revenues, while also establishing greater tax fairness. By the end of the year, momentum had built for a “Millionaires Tax” to tax the top 1% of income earners and generate significant new resources for K-12 education, the safety net and higher education in California.

2012 California Calls anchor groups continue to do broad outreach and surveying of voters on solutions to the state’s fiscal crisis. San Francisco Rising, a coalition of nine social justice groups, comes on board as a new California Calls anchor group representing the San Francisco area.The campaign for a Millionaires Tax attracts enthusiastic support from California voters just as the state faces another round of huge “trigger” cuts to education, the courts and social services. With strategic allies the California Calls Action Fund negotiates with Governor Jerry Brown to combine efforts and promote one ballot measure to present to voters to increase taxes on the wealthy. In an historic development 9 statewide social justice networks and unions come together as the “Reclaim California’s Future coalition” and mount one of the largest community/labor field programs in California history in support of new combined measure, Proposition 30. California Calls Action Fund turns out over 400,000 voters in support of Prop 30 to raise $6-billion for our schools, colleges and health and human services. A full 80% of supportive voters identified by the California Calls Action Fund turned out to vote, compared to a statewide average of 71%, contributing to the margin of victory for Prop 30.

2013 California Calls launches a research project on commercial property tax reform to determine whether there is future potential to generate new revenues for California by eliminating inequities in the current system. California Calls partners with California Common Cause and the California Business Roundtable in a Ballot Initiative Reform Project to explore possible reforms in California’s out-of-control state initiatives system. California Calls begins an ambitious organizing program to transform 567,000 identified supporters into a formal base committed to supporting progressive reforms.

2014 California Calls announces a bolder, more ambitious goal of engaging and turning out 1 million voters by 2016 and continues working with a coalition of labor unions, faith organizations and grassroots community groups to research the best commercial property tax reform policy option for California’s future. California Calls partners with The California Endowment to reach out to 15,000 voters in the Inland Empire and Central Valley to educate and engage them on expanding quality, affordable healthcare to all Californians regardless of immigration status. During the Mid-Term election, California Calls Action Fund joins with PICO California Action Fund forming the ‘Yes on Prop 47’ campaign and contacting over 300,000 voters. Voters contacted by California Calls Action Fund turned out over 12 points higher than the statewide average.

The History Leading Up to California Calls

In April 1992, a jury acquitted four LAPD officers involved in the videotaped beating of Rodney King, an African American man. This horrific incident sparked intense and widespread rioting which rocked Los Angeles and left the City shell-shocked over the depth of poverty, racial inequality and police abuse that existed for many of its residents. Yet while the conditions that precipitated the Los Angeles riots in 1992 were ripe for the turmoil that ensued, the aftermath provided an opportunity for meaningful growth as well.

Just eight months later, in January of 1993, veteran activist and community organizer Anthony Thigpenn launched Action for Grassroots Empowerment and Neighborhood Development Alternatives (AGENDA), a social justice membership organization focused on creating a vehicle for change for South Los Angeles residents wanting to express their collective voices. This group came together to respond to the repressive “Weed and Seed” program promoted by the federal government and the local police to crack down on restless, urban youth in the aftermath of the 1992 rebellion. Instead, community residents argued for economic investment, job training and youth programs to lead the way out of violence and destruction towards stability and their common good.

AGENDA conducted door-to-door outreach, community meetings and town halls to raise these issues and bring the voice of South LA residents to their elected leaders. But in 1995, the work moved to a regional level when AGENDA convened the city-wide Metropolitan Alliance, a coalition of labor and community organizations which focused on defeating the 1996 anti-Affirmative Action initiative, Prop 209. The measure passed statewide but was soundly defeated in Los Angeles thanks to grassroots organizing in thousands of precincts across the city. We knew we were onto something, and that building an alliance that went beyond tactical fights and which developed long-term solutions to the problems our communities were facing was critical to making real change happen.

After the passage of the national Welfare Reform Act in 1997, the Metro Alliance focused on developing an alternative to the “any job is a good job” mantra. People on welfare were organized to help design a job training program that would truly move people from public assistance to permanent, career-path jobs. The result was the City Jobs Program—a hugely successful job training program with the City of Los Angeles which is still a nationwide model to this day. In 1999, the Metro Alliance won a historic agreement with the City of LA and Dreamworks Studios to establish a job training program and career paths for inner city residents to enter the high-growth entertainment industry, a model of a successful public-private partnership to benefit low-income residents.

In 1998, AGENDA had evolved into Strategic Concepts for Organizing and Policy Education (SCOPE). This transition reflected a broader strategy that included regional alliance-building and strategic research. SCOPE wanted to encourage grassroots community groups to do their own research and develop their own programs to solve problems of unemployment and lack of opportunity. SCOPE has continued to thrive and grow with an emphasis on job training and the creation of good paying jobs with career paths as the primary strategy for eliminating poverty in South Los Angeles and citywide. 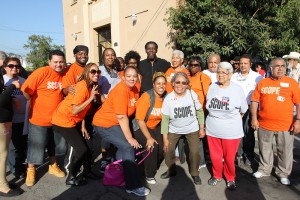 During those early years of engaging residents around local issues, there was a “wall” preventing disadvantaged neighborhoods from getting at the root causes of poverty and injustice which continue to plague LA’s inner city communities. The rising tide of conservative backlash and the steady drum-beat of anti-tax and anti-government policies were starving education and the safety net. Prop 13, the anti-tax initiative passed by voters in 1978, continued to wreak havoc on communities throughout California. It had become clear that locally-based organizing and coalition-building had to link up with labor, civil rights, faith-based, human service and education groups across the state to build the power to win real change. The lessons that came out of the early work around advancing an effective civic engagement strategy, developing grassroots leadership, and fostering principled, long-term alliances were the key ingredients to building power at the statewide level.

In 2009, after 16 years of tireless community-based organizing at the local level and six years of exploration and experimentation at the statewide level, California Calls was born. Launched with a bold and audacious strategy to create a statewide force capable of addressing California’s chronic fiscal crisis and deep budget cutbacks, California Calls has brought a new and powerful voice into the debate around California’s future. At the core of our strategy is a commitment to restore the “California Dream,” by engaging voters who are most impacted by the budget cuts and fiscal crisis — young voters, low-income voters, people of color and immigrants.