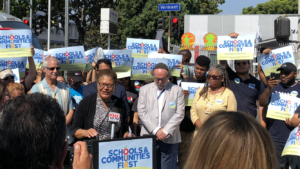 On October 15, Schools and Communities First, a powerful statewide coalition of nearly 300 endorsing community organizations, labor unions, business leaders, philanthropic foundations and elected officials, announced the official qualification of the California Schools and Local Communities Funding Act for the November 2020 ballot. This will be the first commercial property tax reform initiative to qualify for the ballot in 40 years since Prop 13 passed in 1978.

“Californians now have the opportunity to reform a 40-year injustice,” said Helen Hutchison, President of the League of Women Voters of California. “Representing organizations from every corner of the state, our grassroots coalition has made history. After five years of planning and strategizing, we have qualified a split roll initiative for the ballot–an achievement once thought impossible. In 2020, California voters can create a new future by investing in our people and our local communities.”

On August 14, simultaneous press conferences were held in 5 different cities across the state to announce the submission of 856,648 signatures in support of the measure, which needed 585,407 valid signatures to qualify. October 15 was the deadline for California’s 58 Counties to complete a random sample count, and today the Secretary of State announced qualification of the measure due to an exceptionally high verification rate.  Due to a large scale and sophisticated statewide volunteer signature gathering program expertly planned and executed by the coalition, the measure has qualified for the November 2020 general election via the random sample process instead of a full count. This is a significant achievement as more than 90 organizations and thousands of volunteers collaborated to ensure enough signatures were submitted to nearly guarantee qualification on the 2020 ballot in the most populous state in America.

Over the last 40 years, California has lost hundreds of billions of dollars in revenue, 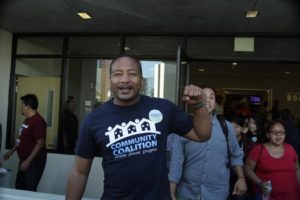 leading to chronic underfunding of schools, services, and local communities along with poor local land use decisions, and a spiraling housing crisis. Schools and Communities First is the first structural and equitable tax reform in four decades. It will reclaim over $11 billion for schools and local communities, shaping a new legacy of investment in the people of California.

The case for split roll reform has been bolstered recently with the publishing of a peer-reviewed study by Dr. Chris Benner of UC Santa Cruz. His research found that passing a split roll reform measure in California would strengthen the economy, debunking a faulty 2012 Pepperdine study that claimed Prop 13 reform would lead to job loss. In addition, major endorsements from elected officials like State Senator Connie Leyva, and a unanimous vote of support from the Los Angeles Unified School District, the largest in California and second largest in the nation, have helped compound recent momentum around the initiative.

Now that the initiative has qualified early, the Schools and Communities First Coalition will spend the next two years expanding the coalition, building public support, and raising the needed resources to counter the opposition’s misinformation campaign, which has already begun.