Pushing Back: Using Voter Power to Resist the Trump Agenda

The large-scale, sophisticated voter engagement systems we have built over the last 8 years reached a new level of impact in California in the November 2016 election—mobilizing over 282,000 young voters, immigrants, Latinos and African-Americans, and new and infrequent voters in low-income communities. Our total voter base has now grown to over 715,000 people who support progressive tax and fiscal reforms, and social equity in California. 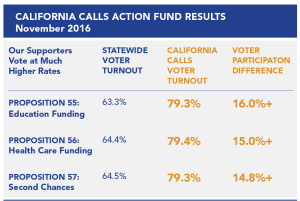 This work has resulted in underrepresented voters playing a critical role in changing the California electorate. In November 2016—in sharp contrast to the disastrous national election results—California voters gave strong approval to ballot measures which will now provide new revenues for K-12 schools (Prop 55), health care (Prop 56)—and begin to shift the state away from incarceration, and towards prevention and treatment (Prop. 57). 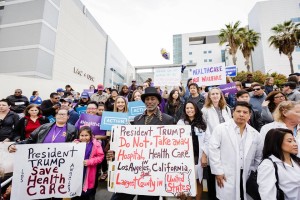 Alongside our statewide allies in the “Fight4OurHealth” Coalition, in January, California Calls dove into the battle to protect the Affordable Care Act which has expanded health coverage for over 5 million Californians. Our anchors lit up the phone lines and knocked on doors, contacting 40,000 voters and generating nearly 4,000 patch-through calls and letters to legislators urging them to protect the Affordable Care Act. Despite having all 14 of California’s Republican Representatives vote yes on the House version of a replacement, the huge fight back waged by “Fight4OurHealth” has paid off, with the Republican Senate still unable to win a decisive vote. 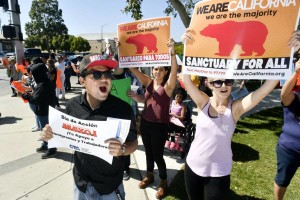 Immediately after the reports of increased immigrant raids across the state, California Calls mobilized our anchors to urge state lawmakers to pass the California Values Act (SB54) and prevent our public resources from fueling Trump’s hateful deportation machine. Through phone banks, door-to-door outreach, and digital organizing, California Calls leveraged its voter engagement power joining the ICE Out of California Coalition’s campaign to make California a Sanctuary State. We contacted 9,000 voters and generated over 2,500 patch through calls and letters to state representatives to express support of SB54. This pressure has been critical in countering the active opposition of the California Sheriffs’ Association, who is collaborating with ICE to weaken or kill the bill. SB54 has passed the State Senate and three Assembly Committees, and will move to a full vote of the Assembly later this summer.