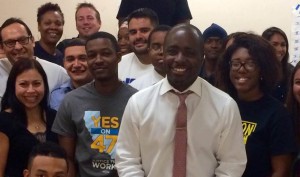 Developing new Black and Latino leadership in the community is at the center of the long-term organizing strategy at California Calls’ Los Angeles anchor organization, Community Coalition. Neighborhood leaders are responsible for the organization’s success in transforming South Los Angeles by winning public safety campaigns, keeping families together and fighting to strengthen public services.

“At the core of Community Coalition’s work is the belief that our community members are the experts. We do everything we can to support our leaders – ensure that they have a seat at the table and inspire confidence that winning is possible” said Alberto Retana, President and CEO of Community Coalition.

The overwhelming support for Council Member Harris-Dawson came as a surprise to some. How could a first time grassroots candidate with only a community organizing background win 62% of the vote in a four candidate primary? To organizations like Community Coalition and Strategic Concepts in Organizing and Policy Engagement (SCOPE), another California Calls anchor organization serving South Los Angeles, the groundwork for such a victorious campaign has been 25 years in the making.

Community Coalition started in South Los Angeles as a community-driven effort to meet the needs of a region that was reaching its breaking point. Their organizing helped South Los Angeles find its way after the 1992 Uprising and since then, the organization has helped community members transform the social and economic conditions in South Los Angeles – including winning $153 million for school repairs and modernization, implementing A-G college prep course requirements for students in low-income communities, clearing out dangerous empty lots to make way for parks and businesses, and bringing awareness to the lack of quality nutritious food in South Los Angeles.

After 20 years of door-to-door grassroots community organizing, Community Coalition was one of the founding anchor organizations of California Calls in 2009. Since then, they have expanded their work to include a year-round integrated voter engagement strategy that allows them to educate and mobilize voters in key elections and keep them involved in their community in-between.  Knowing the importance of civic participation to pass policies South Los Angeles needs and hold elected officials accountable, Community Coalition has made it paramount to mobilize tens of thousands African American and Latino voters to the ballot box.

As part of the California Calls statewide alliance, Community Coalition has talked to 56,445 new and occasional voters and identified 47,244 who agree that California’s priorities should be to fund education and local services.  They also agree and have committed to vote in every election. In all, California Calls anchors have identified 125,000 supportive voters in South Los Angeles.  And they are seeing results. The  35,000 California Calls’ supportive voters in CD8 who voted in the March 2015 elections turned out at a rate 5% higher than the citywide turnout. These voters made up a decisive 42% of the total votes cast in the election, helping Harris-Dawson win the election and avoid a runoff.

Community Coalition follows up with their supporters after each civic engagement program, inviting them to community meetings, workshops and events.  Supporters are asked to become financial supporters of important programs, and to become new leaders in their own neighborhoods.

“South Los Angeles is becoming much more civically engaged because of the direct contact, relationships and trust we’re building in our neighborhoods.”  Executive Director Retana noted. “Our next phase is to build a mass base of 15,000 active, dues-paying members to ensure that the victories we win today continue long into the future.”