4 Ways Grassroots Organizing made the difference in November 2014

As part of the ‘Yes on Prop 47’ campaign, California Calls Action Fund had one-on-one conversations with 145,282 new and occasional voters statewide in the four weeks before the November 2014 election.  100,754 voters said that they supported Prop 47 and on election day. 54% of them went to the polls – a turnout rate 12 points higher than voters statewide.

The passage of Prop 47 is the latest example of how grassroots organizing works.

Check out 4 ways that California Calls’ long-term, strategic organizing led voters contacted by California Calls Action Fund to participate in the election at higher rates than other voters statewide. 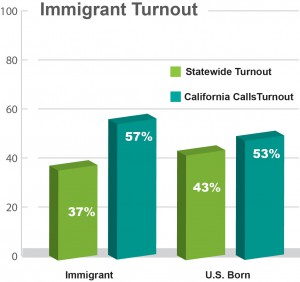 Since 2009, California Calls has built trust in immigrant communities by engaging immigrants through one-to-one contact with grassroots leaders from their community. This strategy allows leaders  to contact voters in their native languages, making it easier for voters to get the information they need about important policies. To date, California Calls has contacted 203,184 immigrant voters and identified 80% as supporters of policies that that prioritize funding for education and critical services, close corporate loopholes and expand democracy to all Californians.

2. Voters of Color turned out to end over-incarceration 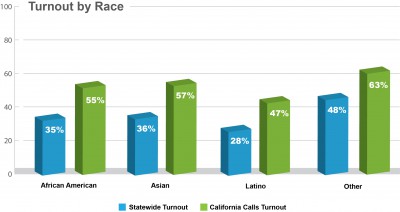 3. Young Voters seized their chance to speak out

Voters age 18-30 have experienced first-hand the results of criminal justice policies like Three-Strikes, which passed with 70% support before they were old enough to vote (and before some of them were born).  These young people have seen their families and communities impacted by high rates of incarceration and their schools left behind as the state increased prison spending annually at the expense of education.

California Calls Action Fund identified 19,505 young voters and 26% turned out to vote on Election Day – 8 points higher than young voters statewide.  This is important progress, and we still have a lot of work to do. 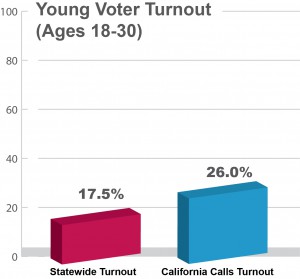 As demographics in California shift, many areas that once leaned away from progressive policies are experiencing a shift in the electorate that is changing the way people think and vote on issues of social and economic justice.

In all, California Calls organizes in 8 shifting counties: Fresno, Kern, Riverside, San Bernardino, San Diego, Santa Barbara, Tulare and Ventura.  In the last election, voters identified by the Action Fund as Prop 47 supporters in these counties turned out 8-24 points higher than other voters in their county. 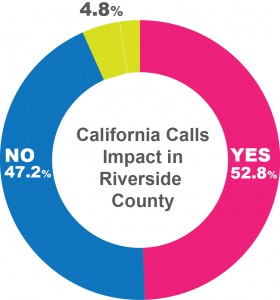 The passage of Prop 47 in November 2014 was the first time in over a decade that Riverside County voters passed a progressive statewide policy.  This win demonstrates how engaging and turning out the emerging electorate – low-income people, voters of color, young voters and immigrants – can make the difference in important elections.