In the old days of grassroots organizing, being able to target specific groups of voters for issue education meant printing thousands of sheets of voter data and sorting it by hand.  With the advent of electronic voter databases, that has all changed. Data can now be accessed online in a smart, strategic and targeted manner.

A few weeks ago, representatives from California Calls’ anchor groups took part in a training to learn the mechanics of California-based Political Data, Inc., otherwise known in the political world as PDI. The business has been around since 1987 and their extensive state voter database is known for its accuracy and ease of use. Their voter file includes the most up-to-date information on voting history and behavior, voter ethnicities and socio-economic profiles. 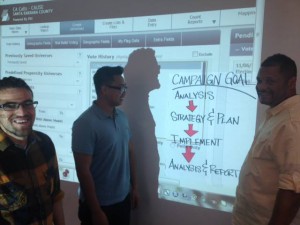 Fifty-one field organizers left the training with new skills, access to their own “sub-account,” and the confidence to share what they learned with others at their organization.

By having direct access to this data, anchors will be able to increase their efficiency and effectiveness in organizing at the local level. Participants were trained on how to use these tools to find out more about their supportive voter base, conduct ongoing education with voters, and enter and analyze the results of their outreach.

The most valuable aspect of the training was learning how to create reports and “go as deep as we want to go,” said Christopher Wilson, the civic engagement director for Alliance San Diego.

“Now we can do micro-targeting. If we want to focus all of our attention on Porter Elementary School, for example, I can go into PDI myself and check out that neighborhood and sort it out according to our needs. It’s really focused follow-up of potential new activists, allowing us to go into the areas we want and map it all out.”

Jessamyn Sabbag, deputy director of Oakland Rising, says she looks forward to being more independent and not having to rely on others within the organization to answer her questions. She says they also plan to customize their civic engagement programs and bring more focus to their local work.

She said she also wants to be able to pull out lists labeling young voters of color in order to do more targeted and tailored outreach.