On November 7th, 2012, we won a major tax reform battle and delivered the margin of victory for Prop 30. This was not an accident but rather the result of our thoughtful strategy and years of preparation. Check out our brand-new Victory Video, which celebrates our historic win and our first step in a longer battle to fund education, services and California’s future. 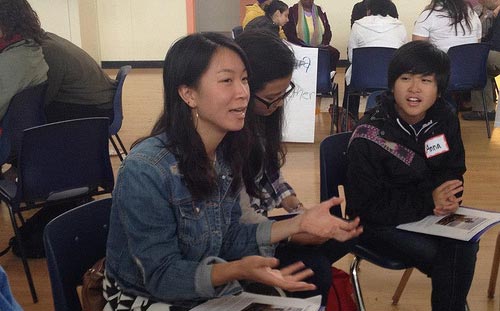 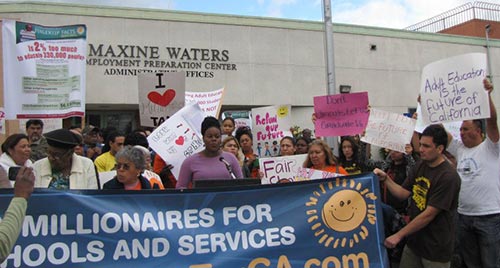 In just three months, anchored by California Calls, the California Federation of Teachers, the Courage Campaign and ACCE – all as part of the Millionaires Tax Coalition — gathered 592,000 signatures and continued to build broad public support, as demonstrated in five public opinion polls.

Through door-to-door canvassing and a sophisticated predictive dialing system, California Calls volunteers, organizers and paid team members made one-to-one contact with 78,000 new and occasional voters to talk about tax equity over a three-week period in March. Many community groups also used the opportunity to discuss a significant policy campaign in their local area and to identify supporters.

17: A Historic Agreement with the Governor 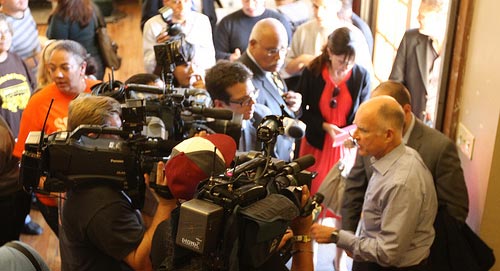 Earlier in the year, pressure had been mounting on California Calls and our allies to stand down and support Governor Brown’s revenue initiative. After a compelling presentation by the principals of the Millionaires Tax Coalition to the Democratic Legislative Caucus in March, Assembly Speaker John Perez and Senate Leader Pro Tem Daryl Steinberg initiated negotiations between the coalition and Governor Brown. The agreement resulted in a more progressive and winnable merged measure, which raised 90% of its revenue from a tax on the wealthy. 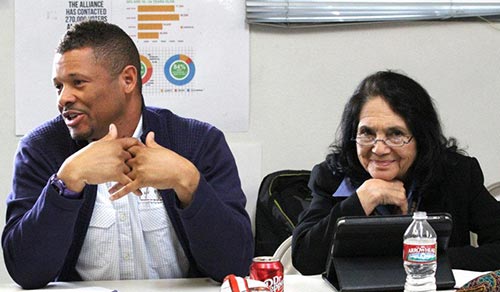 Immediately following the agreement with Governor Brown, 37 organizations regrouped as Reclaim California’s Future and pivoted plans to qualify the merged measure, which needed 807,615 valid signatures in just one month. 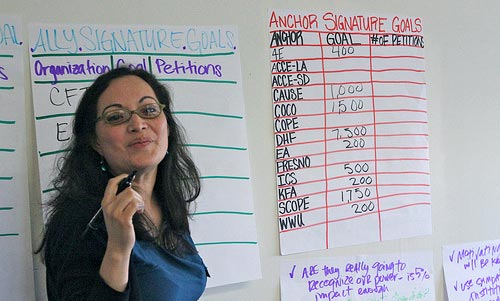 In just four weeks our powerful alliance, along with Reclaim California’s Future, collected thousands of signatures to help qualify the merged measure. On May 9, more than 1,470,000 signatures were submitted to qualify the Schools and Local Public Safety Protection Act of 2012 for the November ballot.

14: Gettin’ Out the Vote in the June Primary 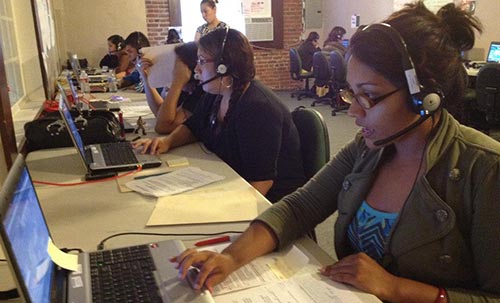 On May 15, 1,000 California Calls leaders began phoning and door knocking to educate and inspire 126,953 new and infrequent voters to get to the polls on June 5. The daily and volunteer organizers surveyed Californians about what motivates them to vote, and distributed a non-partisan voter guide on the June 5 State Ballot Initiatives. 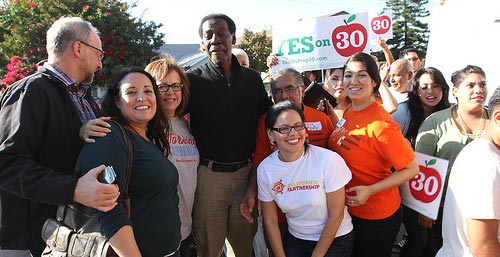 California’s tax and fiscal dysfunction has traditionally pitted social justice advocates against each other, simply to defend their pieces of the shrinking pie. Reclaim California’s Future united the different sectors of the social justice movement in a focused effort to pass Prop 30. Over the summer, the coalition constructed a coordinated field program and a parallel campaign to inspire new and infrequent voters typically overlooked by traditional campaigns.

12: Training the Next Generation of Leadership 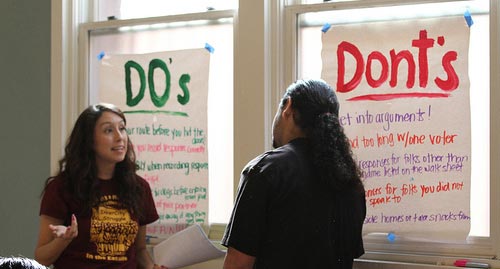 Throughout the year, California Calls trained scores of staff and grassroots leaders through monthly trainings and regional meetings focused on civic engagement, power analysis, community organizing and media. During six regional “Camp Calls” trainings in September, over 500 first time volunteers along with veteran activists learned how to craft their own personal “elevator speech” on progressive tax reform and how to recruit more volunteers and community residents for the Fall campaign. By November 6th, California Calls deployed over 2,500 grassroots leaders—our largest mobilization to date—in a coordinated outreach campaign to new and unlikely voters across the state. 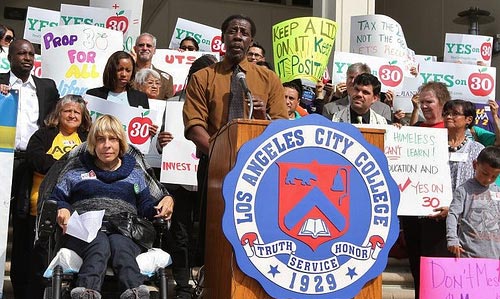 Reclaim California’s Future, a broad coalition of community groups, faith based organizations, educators, and unions, launched the largest ever community led field program in California’s history, focused on delivering the margin of victory for Prop 30 by educating and inspiring infrequent voters to vote on Election Day. Since the battle was going to be close, the coalition planned to turn out 3-5% of the winning vote for Prop 30 –representing 250,000 ballots cast — through a sustained, systematic and powerful statewide field campaign in 23 counties.

10: A New Level of Community/Labor Collaboration 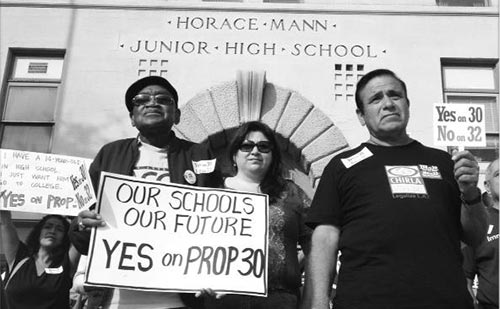 The November Program represented a new level of coordination between labor and community in California. Statewide California Calls and our allies divided turf, shared research and messaging, shared funding and collectively reported each night. By Election Day, all of the Yes on 30 ground efforts had contacted 1,372,042 voters and identified over one million supporters.

Prop 30 had enjoyed majority support in polling since April but suffered in the face of over $100 billion in attacks from our opposition during the month of October. The dropping support underscored the importance of our field efforts to deliver the winning margin. 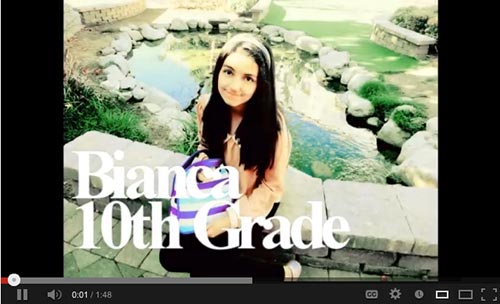 Students throughout California held rallies, registered voters and mobilized students to vote yes on Prop 30. Los Angeles high school sophomore Bianca Vasquez made a compelling argument for Prop 30 and was chosen as the winner of the California Calls/Courage Campaign Video Contest in November. Watch the Video > 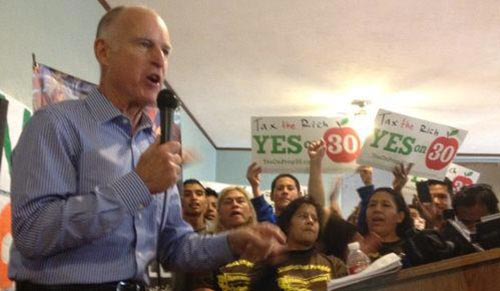 Speaking to an energized crowd of over 300 grassroots leaders and students, Governor Brown rallied phone bankers and walkers in the East LA office of InnerCity Struggle stating, “I believe we can pass Prop. 30.” 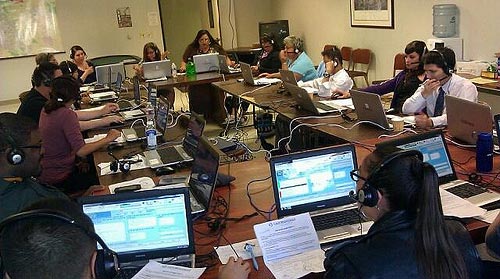 After five weeks of intensive phoning and door knocking, 2,600 daily team members and volunteers identified 295,000 new and occasional voters who committed to vote yes on Prop 30 and no on Prop 32. In the days leading up to Election, California Calls contacted over 20,000 voters per day in 13 counties based out of 16 get-out-the-vote centers. We contacted more voters in the six weeks leading to the November election than in our previous eight civic engagement programs combined. 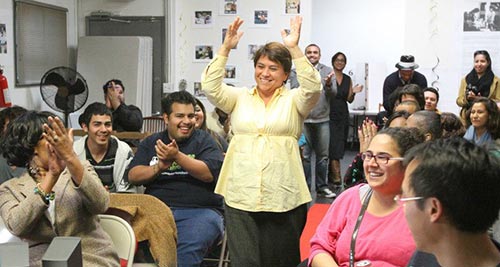 By Election Day, Reclaim California’s Future had contacted 666,202 voters, and identified 490,344 as supporters. We estimate that our supporters represent at least 5.6% of the yes votes on Prop 30. The victory demonstrates that sustained and serious grassroots organizing can prevail over those spending millions of dollars on TV ads and campaign mailers. Watch the Video >

Prop 30’s passage prevented “trigger cuts” to close the state budget gap, with $6 billion in new revenue. Children in K-12 public schools complete this school year, rather than end three weeks early. Teachers will be spared additional furlough days and salary cuts. Parents will not be faced with additional child care expense from a shortened school year. Individuals with developmental disabilities and their families will be spared a $50 million cut that would have drastically reduced health services. California colleges and universities announced tens of thousands of new enrollment seats and tuition rebates.

3: The Future of California is the Changing Electorate

November 2012 is the second election in which young people and people of color increased their share of California’s electorate. The California Calls strategy of ongoing sustained organizing of new and occasional voters is working. After nine civic engagement programs, California Calls has now identified more than 576,000 supporters of tax fairness. We are now working to turn this voter power into lasting change.

2: A Crack in the Dominant Anti-Tax Narrative 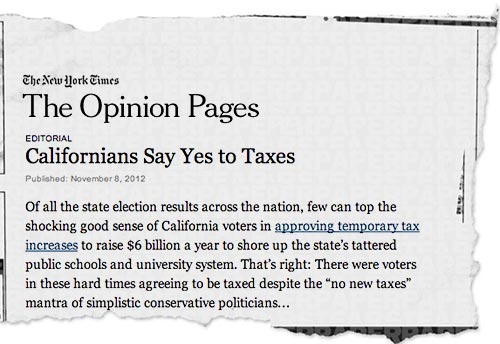 Since 1978, conventional wisdom said that Californians are loathe to raising taxes. With Prop 30’s passage, many declare a new precedent is being set for the nation. Raising taxes on the wealthy and fully funding education and services is clearly growing in acceptance.

1: Commercial Property Tax Reform – Our Next Step in Creating an Equitable California 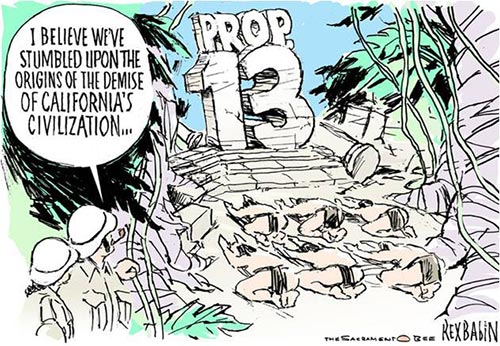 California is the only state in the nation that does not regularly re-assess commercial property values, leading to a loss of critical revenue for our state. Starting in 2013, California Calls plans to begin a series of systematic discussions with our long-standing allies, as well as with other non-traditional strategic constituencies who we think could become part of a winning coalition to tackle the “third rail” of California’s chronic budget and fiscal crises: Prop 13.