California’s Calling: tipping the scales of the change 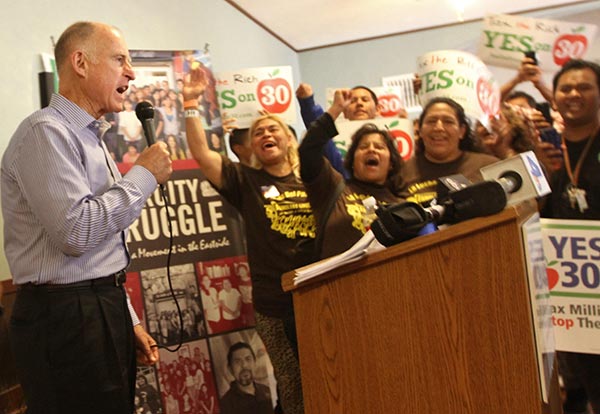 The victory of Prop 30 was a nail-biting, come-from-behind dash across the finish line, but it pulled through with 54% of the statewide vote. California voters are typically loathe to pass any kind of tax increase. Only one was approved in the past decade—a tax on millionaires to support mental health programs. Ten others got shot down over the years.

Early in the night when only absentee and early votes were reported,some feared we might lose. The tide began to turn when the reports came in from counties where California Calls anchors were working to get voters out. The numbers crept up as the ballots came in from our strongholds in Los Angeles, the Bay Area and the Central Coast. And the “No” margins began to shrink in San Diego, the Inland Empire and the Central Valley.

Since April, polls had us well shy of the 60% support that conventional wisdom says you need to win a statewide initiative. For weeks we hovered just above 50%. And a mere five days before Election Day, the latest Field Poll had us at 48%.

So how did we pull it off? What happened? How did we overcome a seemingly insurmountable gap? The answer is remarkable, and quantifiable. And ultimately quite simple.

Organizing works. The ground game that dozens of community organizations and labor unions developed and executed delivered the victory. It was the direct result of the sustained and tireless effort to broaden the electorate by reaching out to new and infrequent voters. One by one and block by block, our organizers and volunteers contacted thousands of young, new and unlikely voters in in Latino, African American and Asian American neighborhoods.

The story of Tuesday’s breathtaking Prop 30 win is all in the margin of victory.

Exactly 9,218,597 Californians cast their vote either for or against Prop 30.

Nearly five million people voted “yes on Prop 30” in support of increasing taxes on the wealthiest Californians to fund schools and services.

In the weeks leading up to the election, thousands of neighborhood leaders made phone calls and knocked on doors to encourage their neighbors to vote. We contacted over 415,000 voters and identified more than 320,000 who supported Prop 30. If even only 55% of those “yes” voters went to the polls, we turned out 173,906 yes on 30 votes.

Even more impressive, when you include the results of our allies from Reclaim California’s Future coalition, we contacted a combined 666,202 voters, and identified 490,344 as supporters. Again assuming that only 55% of them voted, combined efforts turned out 269,689 yes on 30 votes – 5.4% of the yes on Prop 30 Total.

The vast sums of opposition money spent against us is sobering. A small handful of wealthy backers poured nearly $100 million into efforts to defeat Prop 30. But we prevailed. Investment in building the capacities of local grassroots organizations, a diverse and committed coalition, an unprecedented ground game, and multi-faceted coordination among community and labor produced this victory, proof of the capacity and power we’ve built over the past three years.

We won a major statewide effort to get wealthy Californians to pay their fair share. Prop 30 is just the beginning, the first step to course-correcting Prop 13, which has steadily reduced state revenues that should fund education, infrastructure, and a social safety net. California Calls will continue to organize until we have a solid base of half a million supporters who can again prove to be the tipping point in any close race.

Most reporters, pundits, and insiders did not believe we could win. This victory is a testament to our strategy, but equally to the commitment and hard work of our organizers, grassroots leaders, and the new majority of California voters we engaged. See them in action here.