Since the Voting Rights Act of 1965 passed, African American voters have been a powerful and consistent electoral force. For California, home to the fifth largest black population in the nation, this has translated as a powerful progressive political base central to passing policies that address community needs and electing policy makers who will advocate for people over corporations.

And yet, there are tremendous challenges that persist in black communities. While African Americans represent only 6% of the state population, they are over-represented in prisons and jails where they represent nearly a third of of inmates. African Americans also disproportionately suffer the pervasive effects of discrimination and the growing economic inequality with a 29% poverty rate in California. Out of these challenges and others (like state sanctioned violence by police), new movements have emerged, breathing new life into multi-racial alliances African Americans have led for decades. 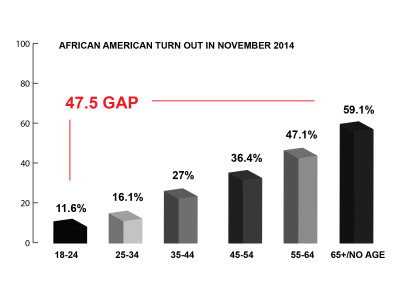 For years, California Calls has engaged and motivated African American voters to the polls across the state – relying on trusted community organizations and grassroots leaders as messengers. 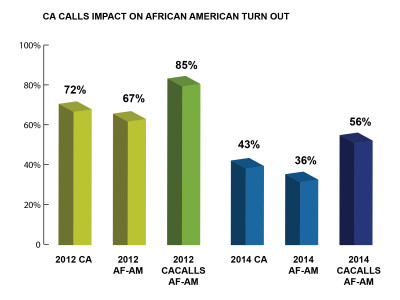 The African American Civic Engagement Project is a two-year capacity building program that will utilize California Calls’ extensive experience. Based on a landscape scan of over 80 black organizations in the state and dozens of interviews, California Calls will identify a cohort of 10 organizations with the interest and capacity to add integrated voter engagement as an ongoing dimension of their power building strategy. The program will include:

The African American Civic Engagement Project is just one way California Calls is focusing on mobilizing the emerging electorate to the polls in 2016 and beyond. It is a key component of the 1 Million Voters Project to help create a new progressive pole and moving our state toward a brighter future for everyone.