The California Calls alliance came together in 2009 to advance long term change in statewide tax and fiscal policies to create a better future for the communities we serve. The statewide alliance is made up of 31 grassroots organizations in 12 counties of California working on a number of different issues to improve the lives of low-income, people of color, and immigrant communities.  Here are 8 ways that California Calls anchors and formal allies are creating change in their local communities: 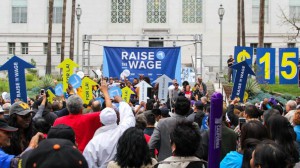 California Calls’ ally Los Angeles Alliance for a New Economy (LAANE) and anchor organizations Alliance of Californians for Community Empowerment (ACCE), Strategic Concepts in Organizing and Policy Education (SCOPE) and Community Coalition helped lead the way for victory through months of advocacy and mobilizing community members to rallies and meetings with elected leaders. 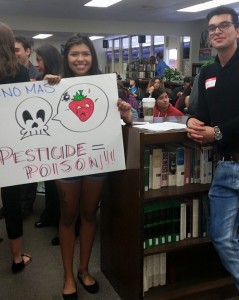 Many of California Calls’ anchors work year round to make their communities healthy with access to clean air, water and green, open spaces.

In the central valley, Communities for A New California (CNC) launched their #OneHealthyFresno campaign to address park disparities in Fresno. They are advocating for the city to invest in parks in areas with high concentrations of low-income, people of color residents.

Along the Central Coast, the Central Coast Alliance United for a Sustainable Economy (CAUSE) has been busy in 2015 advocating for new recycling programs, cleaning up beaches, pushing for a power plant moratorium and new regulations to protect Central Coast communities from toxic pesticides.

Strategic Concepts in Organizing and Policy Education (SCOPE) is cultivating and building a growing movement of climate conscious South LA residents and businesses. They launched #SustainSouthLA to help neighbors find and share solutions and resources for saving energy and, water and sustaining their community. SCOPE is also working to ensure that funding provided by the state cap-and-trade program goes to communities like South LA that need economic support. 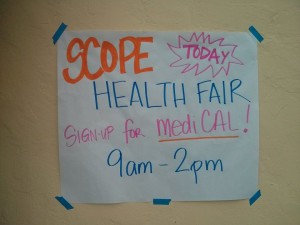 Last summer California Calls grassroots leaders from Communities for A New California (CNC) in Fresno and Coachella and Congregations Organized for Prophetic Engagement (COPE) and Knott’s Family Agency (KFA) in San Bernardino reached out to voters about expanding healthcare coverage to all Californians, regardless of their immigration status. They found that 76% of the voters they talked to agreed that everyone should have access to quality, affordable healthcare. California just got one step closer to making that a reality.  As direct result of the program in Fresno, the County BOS overturned a previous decision to block access to care for undocumented immigrants and approved $5.6 million for specialty medical care for undocumented immigrants and the poor.

Since then, organizations across the state have been talking to their members about healthcare and advocating for expanding Medi-Cal coverage. In June, Gov Brown signed a new budget that expands low-income state Medi-Cal coverage to all income-eligible children regardless of immigration status starting in May 2016. The County Medical Services Program also expanded healthcare coverage for low-income residents. Now, in 35 California counties, all low-income residents who are not eligible for Medi-Cal or private insurance through Covered California can receive coverage through the county program. 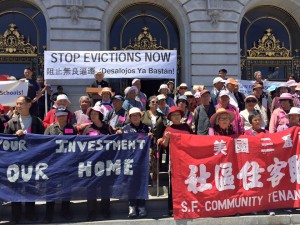 As housing costs skyrocket statewide, many of the low-income, people of color communities served by California Calls’ anchors have been fighting back against displacement and gentrification.  Nowhere is the need for affordable housing more urgent than in the Bay Area.

Recently, Alliance of Californians for Community Empowerment (ACCE) won a campaign in Richmond, California, forcing the city council to develop a rent control and just cause ordinance to help protect residents from exorbitant rents and the threat of being evicted.

Causa Justa/Just Cause, a coalition member of both Oakland Rising and San Francisco Rising, is building a regional movement to fight displacement of residents on both sides of the Bay. They are currently fighting development policies in San Francisco and holding law makers accountable for illegal evictions.

5. Equity in the Tech Industry 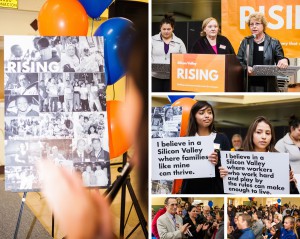 In February, Working Partnerships USA announced Silicon Valley Rising – a new coalition of over 15 labor, faith and community organizations working in Silicon Valley to end occupational segregation and severe income equality in the area.  The coalition is focused on raising wages, creating affordable housing and building a tech economy that works for everyone.

In response to the growing movement to raise wages and conditions for low-wage workers in Silicon Valley, many tech companies are beginning to change their contract worker policies. Earlier this year, Apple replaced contract security guards with full-time employees, Microsoft mandated sick leave for contract employees, and Facebook raised the minimum wage for contract employees to $15 an hour. 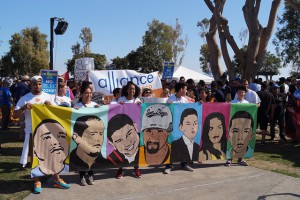 California Calls anchors and allies across the state have been making sure that all members of their community have the opportunity to live in dignity without fear of deportation or violence.

California Calls anchors have been working to educate and prepare their community members to apply for the Deferred Action for Childhood Arrivals (DACA) and Deferred Action for Parents of Americans (DAPA).  In just the first half of 2015, Alliance San Diego has helped over 60 young people in the San Diego area apply for or renew their deferred action status through regular DACA workshops.  The Dolores Huerta Foundation has held multiple townhall meetings to help Central Valley residents apply for DACA, prepare for DAPA and find out how they can protect themselves from fraud during the process.

Beginning this year, all Californians, regardless of immigration status, are now eligible to receive a driver’s license. To date, over 300 Ventura and Santa Barbara County residents have graduated from driver’s license classes provided by California Calls’ anchor Central Coast Alliance United for a Sustainable Economy (CAUSE).  CAUSE is dedicated to making sure their communities have the opportunities to study, prepare and succeed.

Alliance San Diego (ASD) has been leading the charge to end border patrol brutality both locally and in Washington, D.C. as part of the Southern Border Communities Coalition. The Coalition is calling for an end to brutality inflicted by border patrol officers, increased accountability and transparency, and the demilitarization of border communities.

On May 28, Alliance San Diego helped mobilize over 300 people for the National Day of Action to Stop Border Brutality and to bring to the forefront the fact that at least 37 people have been killed since 2010 by Border Patrol or Customs and Border Protection officers. 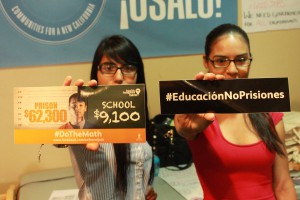 After voters passed Prop 47, the landmark criminal justice bill that reclassifies some low-level felonies as misdemeanors and is giving thousands of Californians the opportunity at a fresh start, California Calls’ ally Asian Americans Advancing Justice – Los Angeles (AAAJ) and anchors Community Coalition, Congregations Organized for Prophetic Engagement (COPE) and Strategic Concepts in Organizing and Policy Education (SCOPE) have been regularly holding workshops and informational meetings to help community members get their records cleared by the 2017 deadline.

8. Equitable Education For All 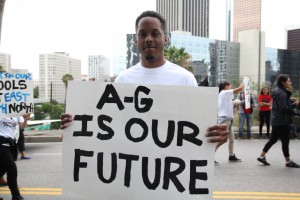 On June 9th, Community Coalition and Inner City Struggle mobilized students and members of the community to the Los Angeles Unified School District board meeting for continued funding and support of A-G college prep course requirements. A-G courses prepare students for a brighter future and give them the skills required to pursue higher education.  Thanks to comments from students, parents and community members, the school board voted to continue making A-G courses a priority and committed to adding additional resources to help students pass the courses they need to graduate.

In July, Community Coalition filed a lawsuit against LAUSD for an accounting formula that will cost needy students $2 billion by 2020, money that should be going to low-income, English learners and kids in foster care under the Local Control Funding Formula. Instead, the LAUSD wants to direct those funds more broadly, diminishing the effect they could have in assisting the most vulnerable children of all.