By a vote of 6-0, the Los Angeles Unified School District Board of Education unanimously 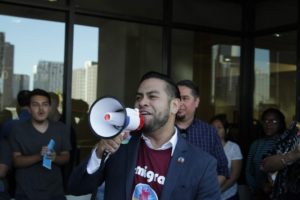 voted to endorse the California Schools and Local Communities Funding Act, also referred to as “Schools and Communities First”, which will appear on the November 2020 Ballot. The initiative would reclaim over $11 billion annually for schools and communities statewide by reforming the commercial property tax loophole created by Proposition 13 in 1978. Los Angeles County schools would receive an estimated $1.4 billion for K-12 education and community colleges .

“This is historic and long overdue,” said Alex Caputo-Pearl, President of United Teachers of Los Angeles (UTLA). “Students and teachers in the LAUSD have gone for many years with overcrowded classrooms and lack of access to nurses, counselors, and librarians. Teachers can’t afford to live in many neighborhoods and buy their own classroom supplies.  This measure will help students in school, and attract new, young educators to the field of K-12 education.”

The Schools and Communities First Coalition submitted over 870,000 signatures last month in order to qualify the initiative, popularly known as “Split Roll Reform” for the November 2020 election. This endorsement represents a significant milestone, as LAUSD is the largest public school system in California and the 2nd largest employer in Los Angeles County. Board Members Monica Garcia and Dr. Richard Vladovic jointly introduced the resolution to support the measure.

“California currently ranks  41st  in per-pupil spending putting a severe strain on students, families, and teachers of our K-12 schools and community colleges,” said Garcia, currently serving as President of the LAUSD Board. “This initiative will help to boost that funding,  especially in the poorest and most needy school districts. It will allow us to have smaller class sizes, and restore funding for programs that have been cut in the sciences, arts and music. We are grateful to the coalition of labor and community partners fighting to increase resources toward more adequacy and equity in California.”

“As a recent graduate of LAUSD, I am excited to join the fight for more investment in education”, said Chelsea Rosales, who graduated from Woodrow Wilson High School in El Sereno this year. “My friends and I see how hard our teachers and administrators work to prepare us for college and beyond, and more resources and funding would mean higher graduation and college acceptance rates for us. There is a wave of student activism happening across the country, and here in LAUSD we plan to make our voices heard in support of Schools and Communities First. All students deserve to feel like they can go to school and succeed.“

The Schools and Communities First coalition unites every region, demographic and sector of California – from north to south, urban and rural, workers and business leaders, seniors and young people, teachers and students, homeowners and renters, and long-time residents and newcomers. Over the next 2 years, Schools and Communities First will continue to expand the coalition, engage in public education to strengthen the path to victory, and raise the needed resources through the existing broad bench of major funders and thousands of small donors. The aim will be to catalyze a conversation in California over the next two years about the need for Prop 13 reform, and build to significantly increase turnout among new and unlikely voters in 2020. 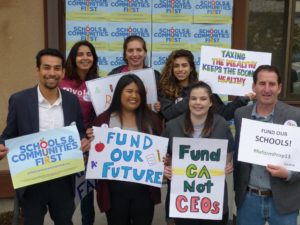 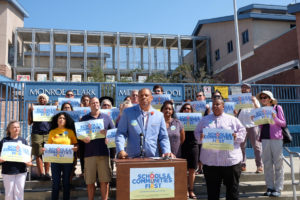 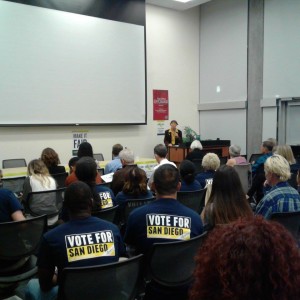 Last week 125 community members and students came together at San Diego City College. They joined community leaders and educators to talk about how we can use the power the community has built to close the commercial property tax loophole in Prop 13.

Guests answered questions and provided more context about how over $804 million a year for education and services could transform San Diego County.

Ismahan Abdullahi from PANA challenged everyone to take on the fight to Make It Fair. She reminded the packed room, “The message we send if we don’t close this loophole in Prop 13 is that corporations are more important than people.”

Make it Fair will host the last community town hall for 2017 in Bakersfield on November 9th.