For California Calls, 2014 was a year of deepening our alliance, building power in our communities, and preparation for 2016.

To celebrate a powerful year, we put together a list of our 7 favorite moments of power building in 2014:

1. Prop 47 Gives Thousands of Californians a Chance for a Brighter Future. 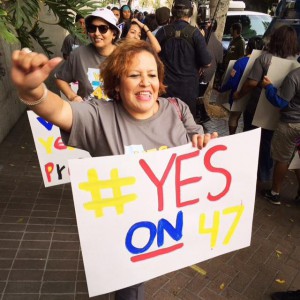 20 years after the passage of three-strikes, Prop 47 passed with 59% of the vote, reducing six non-violent, low level crimes to misdemeanors, and redirecting hundreds of millions of dollars annually from prisons to prevention programs, education and victim services. Nearly 50,000 people in California will be eligible for reduced sentencing, and hundreds of thousands more can apply to have their record cleared.

California Calls Action Fund and PICO California Action Fund joined forces to fuel a large scale ground game to increase voter turnout for Prop 47. Together they mobilized 8,000 grassroots leaders and contacted over 300,000 new and infrequent voters in 14 counties of the state – identifying 250,000 “yes” votes for Prop 47.  And in the last four days, the coordinated effort re-contacted 40,000 supporters from San Diego to Sacramento to motivate them to the polls.

The Prop 47 win didn’t happen overnight. It has taken years of grassroots community organizing to expand the electorate by targeting young people, new citizens, and people of color who are typically overlooked by electoral campaigns.  When Three Strikes passed in 1994, only 22% of California’s electorate was African American, Latino or Asian Pacific American voters. According to exit polls, voters of color made up 37% of the electorate in the November 4 election. 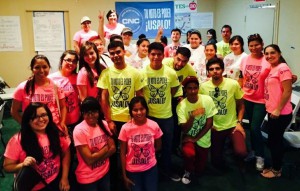 In November, President Obama took executive action to give temporary legal status to 1.1 million immigrants in California. His decision was a huge 1st step toward the immigration reform many of California Calls member organizations worked toward throughout 2014. Alliance San Diego, Communities for a New California, Central Coast Alliance United for a Sustainable Economy (CAUSE) and the Dolores Huerta Foundation mobilized their communities to take direct action to put pressure on their elected leaders to stop deportations and pass a national immigration bill.

Over the summer, California Calls members Communities for a New California, Congregations Organizing for Prophetic Engagement (COPE) and Knott’s Family Agency contacted 15,000 voters in the Inland Empire and Central to build support for expanding healthcare coverage to undocumented Californians.

California Calls recruited over 18,000 new immigrants to be part of our growing base of supportive voters. Immigrant voters are an important part of the emerging California electorate and make up 26% of California Calls supporters.

3. Communities Most in Need Win Big in Education Funding Battle. 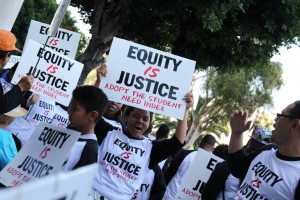 California Calls member organizations in 7 counties organized students and parents to advocate for their local schools for Local Control Funding Formula to ensure the additional funds they created when they went to the polls to pass Prop 30 were used for schools with the most need. 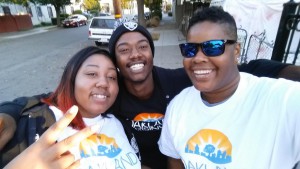 Years of building a base of infrequent voters who are educated and engaged around how tax and fiscal policy impacts the state and their community led to local victories in the 2014 midterm election and throughout the year. 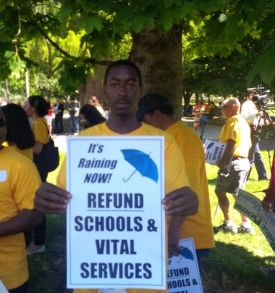 In May, while our legislative leaders debated the state budget, California Calls conducted our 12th civic engagement campaign to build support for making our communities California’s spending priority.  Out of the 98,833 voters contacted statewide by our 700 grassroots leaders and volunteers, 80,354 (81%) said that they supported California reinvesting $5 billion in education, services and safety net programs.

Unfortunately our elected officials chose to embrace the “new normal” of low levels of funding. While we avoided the drastic cuts of the past (thanks to Prop 30), the legislature chose putting more money away for a rainy day and invested in prison expansion.

There were a few wins for our communities. The 2014 budget included:

More work is to be done to restore the cuts that our communities have faced. In 2015, California Calls will continue to urge our legislators to prioritize our communities and raise more money for the state by making big corporations and the richest Californians to pay their fair share at tax time. 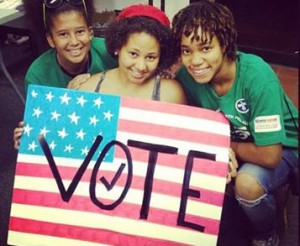 On January 1, when millions of Californians became eligible for new quality, affordable health care, many of them also belonged to the over 6 million people in California who are eligible to vote but are unregistered.  Under the National Voter Registration Act, the state health insurance marketplace, Covered California, was required to provide all applicants the opportunity to register to vote when they signed up, but were not fulfilling their obligation.  As a result, hundreds of thousands of potential new voters were missing their chance to have their voices heard in their community. 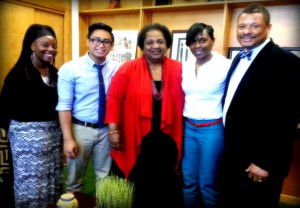 In April, California Calls’ grassroots leaders, armed with our 2014 Policy Platform, met with 16 legislative leaders in districts where California Calls has a deep supportive voter base. The delegations brought to life the challenges our communities face thanks to years of budget cuts, the significance of our work, and began to build relationships with key leaders.  Grassroots leaders shared stories about the impact of Prop 30, the need for parent and community involvement in school funding decisions, the pain from years of cuts to health and human services, and solutions for raising revenue to reinvest in our future.

These delegations were only the first step in both breaking the barriers between our leaders in Sacramento and the communities they represent and beginning to train an army of grassroots leaders to advocate for their families and neighborhoods.

Now that we’ve grown our supportive base to 626,600 voters in just 5 years, we’ve turned out half a million new and infrequent voters in the last two major elections, began to make the California electorate look more like the real California and helped create the margin of victory for both Proposition 30 and Proposition 47, what’s next?

Over the past year California Calls and our allies have been researching, polling the public, and building support from the faith community, grassroots organizations and businesses to find the best options to raise billions of dollars to restore the cuts to our communities and create a stable future for California.

Our next battle won’t be easily won. In order to succeed, we must educate and engage 1 million voters by 2016.  We’ll face tough opposition at every turn, but you can help us see victory – Donate $25 today to help us reach more voters in 2015.