What are Property taxes? Why do they matter?

Property taxes are taxes that all property owners pay yearly based on the value of their homes, businesses or land. The taxes are collected by local governments – counties, cities, school districts, and other special districts – to pay for the things we use every day. Our roads, parks, libraries, county health departments and schools are all partly funded through property taxes.

But there were three unintended consequences to Prop 13:

Closing one of the major loopholes created by Prop 13 – the loophole that applies the same cap on corporate property as homeowners – would raise an estimated $9 billion dollars a year for local government by 2020. This translates into millions of dollars for local cities and counties: 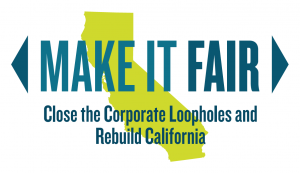 It’s time to make our property tax system fair. Are you ready to close corporate loopholes, protect homeowners and small businesses, and raise $9 billion a year for our communities? Click here.